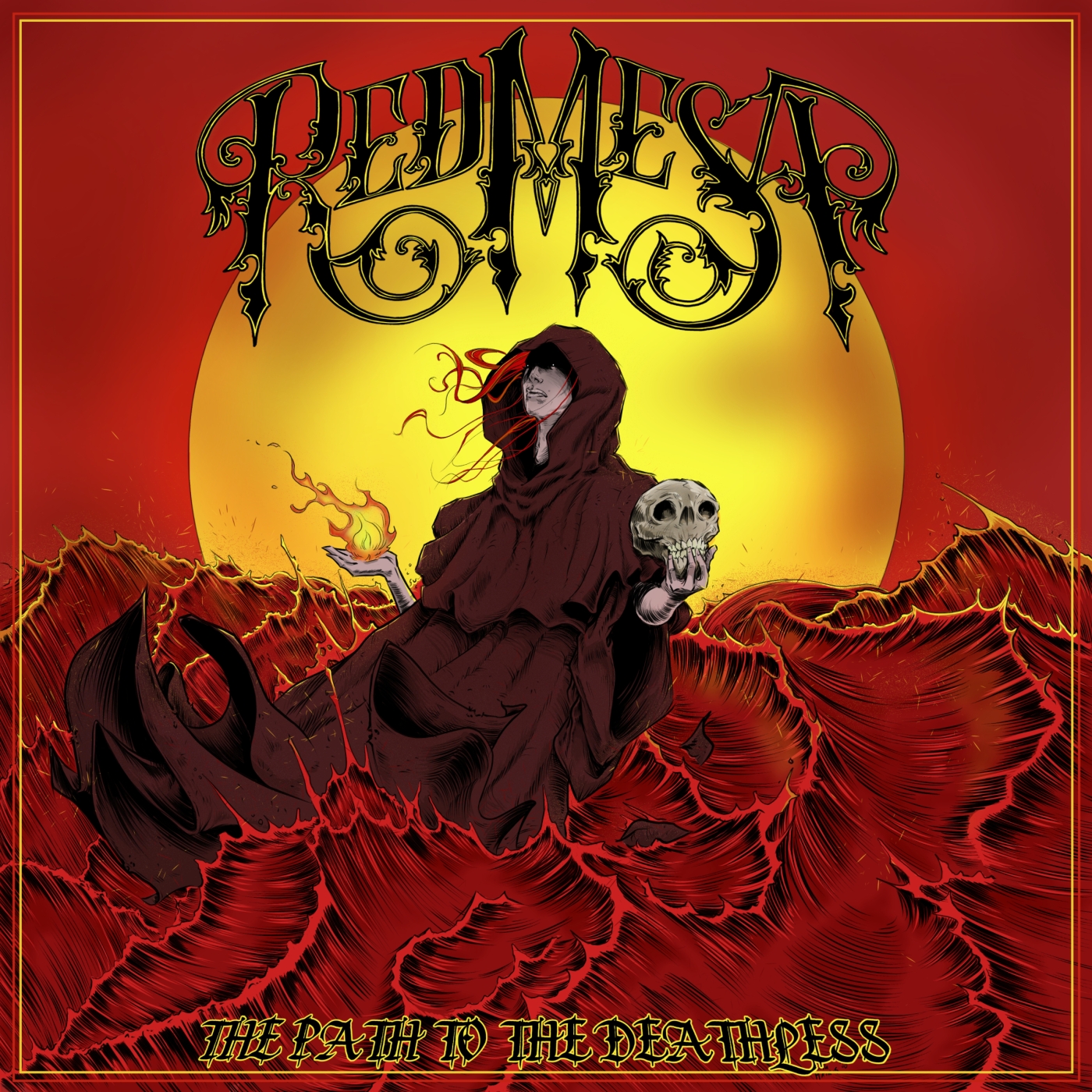 Dehydrated and disoriented deep in the deserts of New Mexico you watch as the crows, who have been following you for some time now, begin their descent. They know it, and deep down you know it too. The sun, beating down from up high, has token its toll on your wary vessel; as the last ounces of energy deplete the hallucinations kick in like some long forgotten acid trip gone awry. As one inescapable flashback after another slams into you from every direction not even the solitary figure watching from a distance can calm your frantic mind and catch your weakened body before you fall into the dust – but once you are down he takes your hand and raises you, the shell of a person you once knew at your feet, and leads you towards the setting sun. It’s time to head westward my friend, down The Path To The Deathless, toward the next phase of your eternal voyage. As you turn to look one last time to the crows now picking at flesh the air becomes filled with Red Mesa’s perpetually distinctive sun-scorched grooves, heralding the beginning of the rest of your time on this planet.

Three things you need to know about Albuquerque’s sons of low-end: they love the devil, they love the open road, and they sure as hell love the desert. It’s in their blood, simple as that. And when you cook this blood in a kiln alongside a hefty helping of Americana and that ’90s Palm Desert sound you’ve got yourself a Red Mesa record; these slabs o’ wax are forged as far away from civilisation as you can get, tanned by the sun’s unforgiving radiance, and baked deep in the very earth upon which the trio of Brad Frye, Roman Barham, and Alex Cantwell know all too well.

Cruising along on a spiritual journey toward the afterlife – one which is clad in red clay and asphalt – The Path To The Deathless ramps up the heaviness on side B of 2018’s bodacious The Devil And The Desert in an unholy amalgamation of arid jams, revving bass motors, and sweeping solo deluges. You close your eyes and you can hear the highway, taste the sand kicked up in the wind, feel the heat pummel your skin. At times the record is a bruisin’, guttural romp through rock and crust (geologically speaking); other times it lifts you off your feet, engulfing you in a sense of epic, CinemaScopic bewilderment. Thus, whilst plenty ethereal in places, The Path… is not a mere conjuration of the (sonic) desert mythologies which the genre has become synonymous for; instead, what you are hearing is pure desert.

For all the splendour running rampant throughout Red Mesa’s third effort, the barraging whiplash of tumultuous tonal shifts across the running time may not be for those seeking a straightforward listen. Seven tracks is a small quantity to be bouncing between paces and styles with such hyperactivity that, to the uninitiated, The Path… may potentially come across as jarring, rendering the fully immersive experience incomplete. That being said, if you’re familiar with their glorious back catalogue you’ll know this is all part of the charm, for Frye and company have always strayed from the normative album backbone to great effect. If anything, each track’s distinctive personality is left firmly imprinted on you for longer. It’s a bold move which certainly pays off.

Despite such hyperactivity there is no sacrifice in the quality of the music. Roaring the record into high gear Frye powerhouses his way through opener Ghost Bell in such deathly fashion before cutting through the tectonic riffs off the title track as if they were nothing; they even find time to embrace the eye of the storm before hurtling across the wasteland once more. Towards the end this is repeated in the blink-and-you’ll-miss-it “Revelation” that frankly knocks you clean off your feet, before cranking up the tension in the concept’s finale “Swallowed By The Sea”, itself an monumental exploration of texture and might. Buried in the middle, “Death I Am” is a mirage, a flicker in the moonlight, the crackling of embers; a ode to the mythic, it strikes a chord into the hearts of many a wayfaring stranger. And with two distinguished guests in the fold – Earthride’s gravel-soaked extraordinaire Dave Sherman on the deliriously heavy “Desert Moon”, a monstrously groovy anthem just waiting to implode under its own weight, and the legendary Wino Weinrich espousing majesty on brooding centrepiece “Disharmonious Unlife” – The Path… more than proves itself to be the one that ought not to be less traveled, and a necessary soundtrack to your voyage beyond the sun.

Coming to you via Desert Records