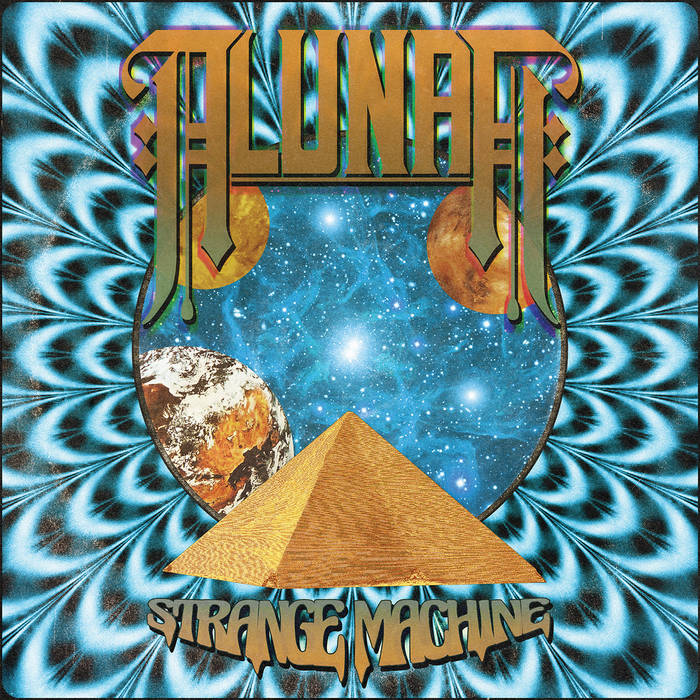 You could quite easily spend the rest of your life trapped in a listless delerium chasing the tail of the crowd, negating the illusion of its proximity, and misconstruing it as a failure on your part to forever linger a breath away from what is it. Even in the grip of a worldwide pandemic the frenetic alienation that comes with chasing it becomes an overbearing stain upon the modern life architecture, and even those who succeed in grabbing onto it‘s constant metamorphosis stumble and fade into obscurity, feeding the shadows that grow on it’s outskirts. The world is a cruel, broken realm, and spiritual purification is in need more than ever. Strange Machine is a record of pure catharsis, a labour of love that triumphantly blasts through all the vitriol born in the darkest of places, and brings light to where it is needed most. Fuck whatever it is, Alunah ought to be your beacon in these bleak times.

The sound of a band transcending their stature as pillars of the British doom community, Strange Machine is a powerful tour-de-force that taps into something greater than itself: nirvana. Powered by immensely groovy riffs the record launches from its earthly domain, leaving behind the shattered ruins of a world gone wrong, and takes you on a voyage through frequencies we have been forced to abandon for one reason or another. That isn’t to say Strange Machine is a trip back to safer, happier times; instead, it surges forward, outward through psychedelic consciousness, guiding our innermost selves out from the maddening darkness with its nurturing hands. At this vessel’s helm is Siân Greenaway who, by shining example, comes fully into her own. Hers is a voice already steeped with tempestuous intensity but here, on her second full-length outing, the range and power she expels is breathtaking, as if each song – particularly the introspective healing of ‘Broken Stone’ and the charismatic belter ‘Teaching Carnal Sins’ – is an act of self-liberation.

And yet, it’s not just Greenaway’s stellar frontwomanship propelling this vessel through the stratosphere: Alunah have become emboldened, reborn amidst the unforgiving wasteland which has been the decade thus far, and the immensity of this regeneration lies in the irrestible swagger and groove injected into the Strange Machine. Stand out riffs and licks are in plentiful supply here courtesy of the newly appointed Matt Noble, and the likes of ‘The Earth Spins’, ‘Strange Machine’, and the quintessentially anthemic ‘Silver’ steal the show. This heavy-hitting and rousing record is superbly balanced out with the West-Coast psychedelia of appropriately-dubbed ‘Psychedelic Expressway’ and ‘Fade into Fantasy’, an opus enveloped in the smouldering, velveteen haze the band are renowned for, keeping our engines and imaginations alight. Closing out with the ferociously captivating ‘Dead Woman Walking’ Sabbath City’s finest reach in and pull-out our truest personae with feet-stomping and the weight of the world hurled off into the horizon.

Strange Machine is pure catharsis. It captures the spirit and energy of our struggles before setting it on fire with each thunderous spectacle it has at its behest. Lovingly crafted and sublimely executed, the record sees Alunah radiate under a new, formidable light – it is an undeniably dominating yet cool presence to behold, one where close proximity assures stimulating, unbridled confidence. Underneath all that though is a blistering, vivacious rock’n’roll record overflowing with vibrant heaviness. Crank it up as loud as you need it and feel free to lose yourself in its healing aura for it promises to reinvigorate and lighten up your day. And boy does it deliver on that promise!